One of my followers suggested doing a tutorial inspired by this look created by the super talented Anna a.k.a @pinkperception! She wanted to see how it'll look modified for monolids, and I decided to give it a try. Here's how mine looks! 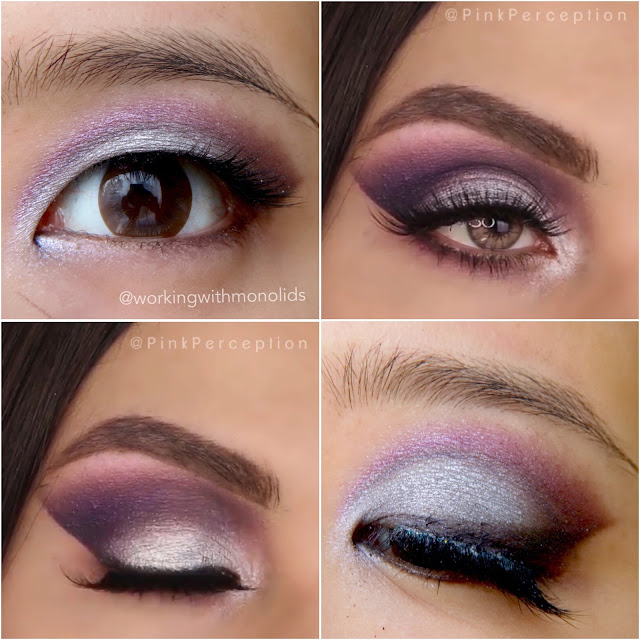 So in @pinkperception's tutorial, she uses a shadow shield, which can be replaced with tape. I ran out of tape, but figured I shouldn't procrastinate on this, so I'm doing this tutorial without tape. If you have tape lying around and prefer using it as a guide/to help you keep the edges crisp, go for it! If you don't have tape, I'll show you another way you can get a crisp edge! 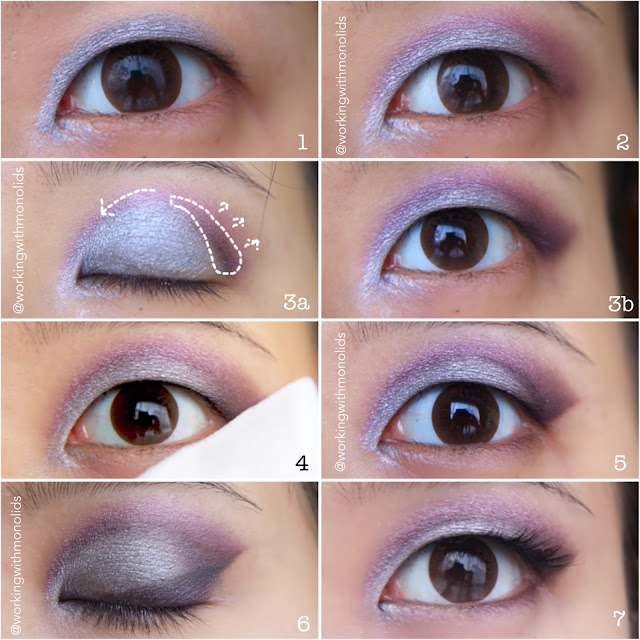 1. After applying primer, apply the silver eyeshadow in a semi-circle, making sure it peeks above your "eye line". I know most tutorials call for this step last, but I personally find it easier to do this first with my monolids, since I have no crease to guide me and help me figure out how high this should go. If you're comfortable with doing it the traditional way, there's nothing wrong with that too! It's just that I have the tendency to look like I got a botched up plastic surgery when I do it the traditional way. Apply loose powder above the semi-circle. This will help you get a softer blend later.

2. Grab a tapered blending brush and blend a purple eyeshadow above the semi-circle. Now...this part really depends on the shape of your eyes. Some girls with Asian eyes have told me that a lot of typical non-Asian looks make them look "off" and they're not sure what it is. I find that usually, the high upward sloping (like cat eyes) shape typical of non-Asian make up may not be the most flattering for Asian eyes, and that's why it can look "off" for some women. I've applied the purple eyeshadow in the shape that's still similar to my inspiration pic (higher at the edges), but modified to make it more flattering for more Asian eyes (sloping downwards) towards the edges. Again, this really depends on your eyes. I like how dramatic cat-eye shaped eyeshadow placement looks on me, but I know it's not for everyone.

3. Now grab a dark purple eyeshadow, and with the same tapered blending brush, blend it into the edges of the silver semi-circle, going higher on the outer edges (view 3a for a rough sketch of eyeshadow placement & blending directions).

4. Grab a clean crease brush and brush it back and forth at the top of the eyeshadows to further soften the blend. This is the point where you take off the tape if you were using it. If you're not using tape, grab a cotton pad, soak it in eye make up remover, fold it in half, and align it with where you want the crisp bottom edge of your eyeshadow to be. If you're not sure how to angle it, a good guide is to just follow the angle of your outer lower lashline as it slopes out.

5. [OPTIONAL] Now here's how you can really create an illusion of a crease on monolids. Some people may find this a bit too dramatic for real life, so feel free to skip it. Grab a super precise eyeliner brush and use it to apply a line of black eyeshadow, outlining the silver semi-circle. Blend it well.

6. Now, @pinkperception tightlined her lashline, but with hooded monolids, I'm afraid that line just won't show up. If your monolids are hooded like mine, there's no way around it, you'll have to go way fatter with the line towards the outer corner, so it looks like there's a triangle sitting on the edge of your eye. It'll look slightly more dramatic when you close your eyes, but it'll be fine when you open your eyes, I promise.

7. Line the outer half of your lower lashline with the purple eyeshadow, dab the silver eyeshadow in your inner corners and apply lashes. That's it! 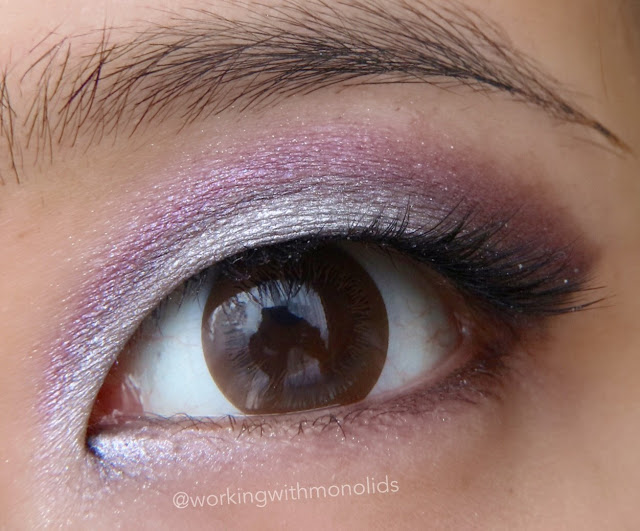 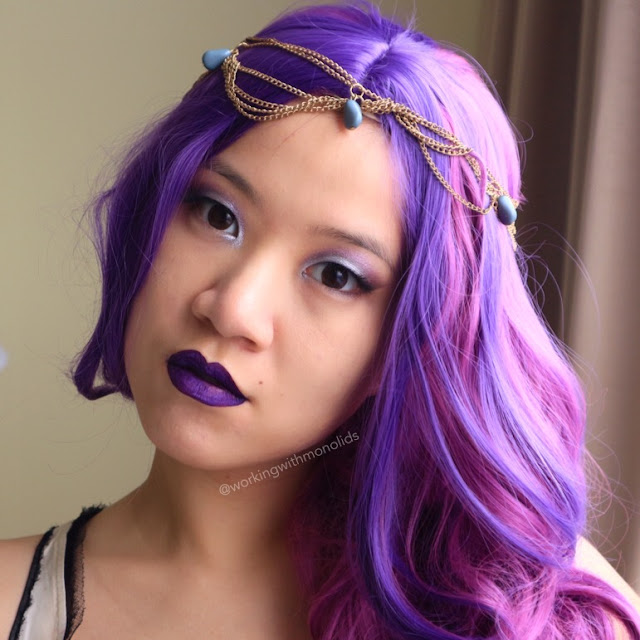 Makeup Is Damn Important - The "No Shit, Sherlock" Experiment Results

I was inspired by this Huffington Post article about the importance of makeup. One of the criticism of that experiment is that the difference was the smile & expression, but after over 8 years working professionally, I know that makeup makes a HUGE difference. I decided to repeat the experiment to see the effect of the "makeup tax" on women, only I decided to use the same, identical picture, just with one edited to give the appearance that I'm wearing makeup.


The only difference I made is to add a bit of colour to my lips and cheeks, darkened my brows, evened out my skin tone & got rid of my spots, and added a winged liner. So nothing drastic, but probably about 30-45min of work IRL (1h if I'm breaking out really badly).

For this experiment, I used PhotoFeeler a site where other users rank you on several qualities based on your photos only. In return for votes, you get credits you can use to get your own pictures voted on. One vote gives you one credit, which gives you 1 vote on your own pictures. I initially planned on getting 100 votes for each picture in every category (so 600 votes total), but I kept running out of pictures to vote for, so I decided to limit the "Dating" and "Social" categories to 40 votes each, while sticking to 100 votes for the Business category since that's what I'm most interested in (360 votes total).

To ensure no one accidentally sees a makeup & no makeup pic at the same time and realizes something is up, I made sure that there's a space of a day after voting finishes on the first pic before I posted the next pic. I also thought that it may seem unprofessional if people see the same pic that is supposed to be for "Business" in the "Dating" and "Social" categories, so I only posted the same pic into the last two categories after the "Business" voting is over.

As you can guess, the pic with makeup with immediately ranked higher for competence (10% higher), likability (23% higher) and influence (10% higher). Not only that, the pic without makeup got comments mentioning that I looked "somewhat unconfident" and "a bit uncomfortable", my "smile seems a bit forced", and "something seems a bit odd with [my] eyes...[they look] a little scary". It's called massive eyebags and yes..they're scary. Shows I'm in dire need of sleep and may murder you for coffee.

The only criticism about the makeup pic is asking for a different post or angle, which is what I got for the non-make up pic as well.

I would think going out without make up signals confidence, but nope. People think you're more confident with makeup. Kinda goes against what people like to say about makeup and insecurity. I thought the confidence measurement is important for work too, so now I know I definitely need to wear makeup before a big presentation.

The eyebags definitely made an impression again, since the only comments in the no makeup pic mentioned that I look tired. I find it interesting that I got more criticisms in the makeup pic (4 vs 1), where people told me to fix my posture, pose differently, make eye contact or wear something different. Maybe they thought the same about the no makeup pic, but said nothing since they saw how messed up I looked and felt bad.

Again, the make up pic does better. Shocking. What I wanted from this test is the intelligence rating, and the sad news is that I'm perceived more intelligent (14% higher) with makeup. Ouch. Also, I'm rated at 6% more trustworthy with makeup. So once again, I have no idea where the people who think makeup look "fake" are coming from.

Without makeup, my attractiveness plummets by 57%, but that's hardly shocking. Whenever people tell me I look pretty, I tell them it's my make up skills and I'm not being modest or lying.

Again, I got told I looked tired. This experiment shows me that my best makeup investment is my undereye concealers. Interestingly, I got told to wear a different outfit in the makeup pic again. I wonder why no one tells me to wear something else in the no makeup pic. Maybe no one wants to see more skin when my face is a wreck.

Sure, your job performance can ultimately counter your first impression, but I'm sure we've all experienced how important a first impression is. So yes, if you need to make a good first impression, definitely wake up an hour early and make your face up.
Posted by WorkingWithMonolids at 1:10 AM 14 comments: