Recently I purchased some sample eyeshadows and a sample primer from from Eccentric Cosmetics. I purchased a set of 5 eyeshadow samples and got 2 free samples!

I didn't have much interaction with Anna, the owner, so I can't comment on the customer service except to point out my AWESOME turnaround time:


So on to swatches! 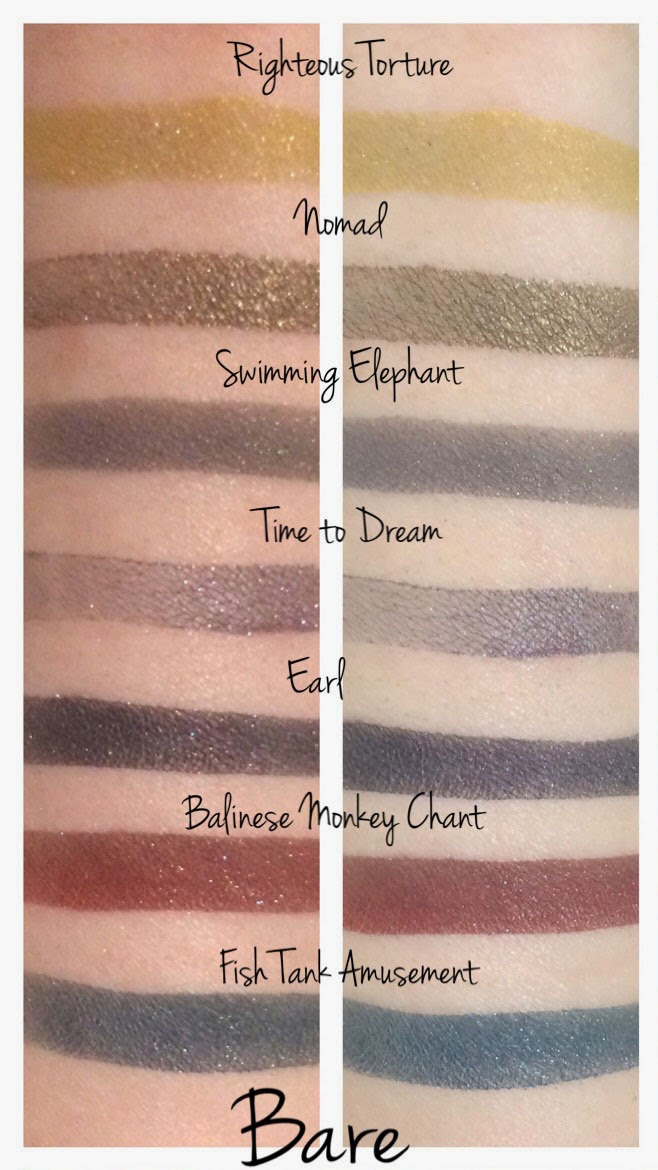 These are pigmented even on bare skin! I'm impressed!

Yes, as you can see from the swatch, Time to Dream is pretty patchy. That colour gave me a lot of trouble and had a noticeably different formula than the rest. While the rest applied smoothly, Time to Dream is a bit streaky, patchy and hard to apply. It's just one out of seven, so I'm chalking it up to a bad batch. Isn't Swimming Elephant to die for?? Freaking gorgeous! I'm not sure why they named a colour Balinese Monkey Chant. If you've ever gone to the monkey temple in Uluwatu, Bali, you'll know that monkeys are vicious creatures and the sound of Balinese monkey chants should send you running in terror.

Now I just have to go on a huge rave about their primer. It's amazing. It's honestly the same quality as my Urban Decay Primer Potion. The only difference I saw in quality is that certain colours stain with UDPP but NOT with Eccentric's primer. I was impressed! Here are swatches with both primers as comparison. As usual, the left half is under artificial light, the right half is under natural light.

Ok, so that looks good. But what if that works well only for Eccentric's eyeshadows? So I tried other brands too.  Left half is under artificial light, the right half is under natural light. Can you guess which swatches are over UDPP and which are over Eccentric's primer?

So far the colour pay off looks great. But does it help my eyeshadows stay? So I decided to wear it out. This is after 5h of use:


Yes, it was still going on strong with just the slightest hint of fading (the inner corner's my fault...I rubbed my eye). I live in a hot, humid, tropical country and have oily skin. So the primer went through a LOT. I think it could probably last longer, only I was stinky and had to go shower.