Recently, I hauled hard from Focallure. I've been resisting buying this brand because I don't trust it, but it's getting really popular in Indonesia thanks to several sponsored videos from big beauty bloggers, so I thought I should buy their products and give my honest review. I bought my Focallure products straight from the official Focallure store on Aliexpress. This is part 2 of my 11 part review.


Ok, I admit this palette has gorgeous colours. The duochromes are a dream. Here's the swatches: 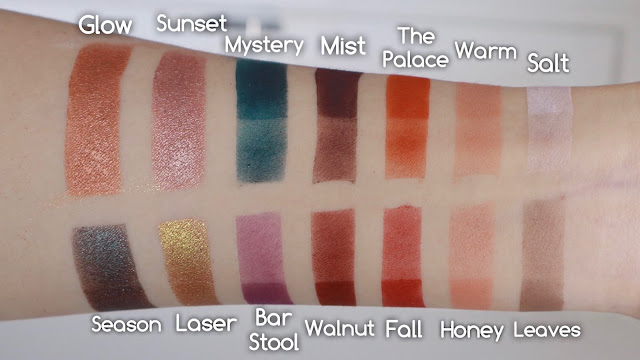 It's also really cheap at $11.28. I bought these from the official Focallure store on Aliexpress, which has perpetual sales and sometimes list 2 different prices for the same item, so the price may have changed.

But here's why I can't recommend this palette:


This shares the same ingredient list as the loose pigment in Blue Brown & the 9 Colors Eyeshadow Palette in 05. Completely identical, down to the colourants. 3 different products with different colour schemes have the same identical list of colourants. One single loose pigment colour supposedly contains ALL the colours that exist in a 14 & 9 colour palette. That's right.

It does not say "May Contain", which is the common thing brands do when they don't want to print different ingredients lists for different shades within the same collection. It listed all of the colourants in, which makes me think that either they don't understand what ingredient lists are, can't give a fuck about creating proper ingredient lists, or both.

To be fair, I haven't had any adverse reactions to this palette yet, but I'm still not sure if I'd like to push my luck.

It says Everchanging at the front of the box, but the back listed the palette as the Tropical Vacation palette. There's also a glaring typo where "eyeshadow" is spelled as "eyeshaodw". I know this is a minor thing, but I feel like if the brand can't give a fuck about checking things like typos, I don't know what else they don't give a fuck about.

Like the Twilight palette, this is just a mess of kickback and fall out.

Mystery is especially streaky and it took a lot of praying to the eyeshadow gods to make it work in this tutorial:


Would I buy this again?

Nope. I feel like a 5 year old would put more care into creating this palette.
Posted by WorkingWithMonolids at 9:24 PM 2 comments:

Recently, I hauled hard from Focallure. I've been resisting buying this brand because I don't trust it, but it's getting really popular in Indonesia thanks to several sponsored videos from big beauty bloggers, so I thought I should buy their products and give my honest review. I bought my Focallure products straight from the official Focallure store on Aliexpress. This is part 1 of my 11 part review.

So here are swatches of the colours: 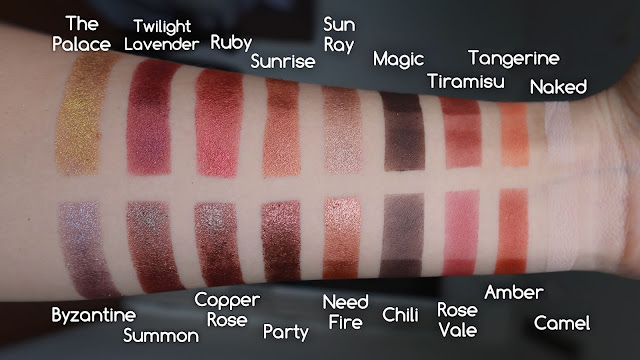 This eyeshadows in this palette are really, really soft. Especially the shimmers. There was just loads of fallout & crumbling. As in ABH Subculture level of crumbling. I think this could be worse, but I didn't get the Subculture palette after all the terrible reviews so I'm not sure.

I've never had a pressed palette pigment be this crumbly before. I feel like I'm sharting fairy dust around whenever my brush hits the shadow. I opened the palette on my bed while trying to write down the shade names in the swatch picture, and I shimmer bombed my husband. Our entire bed is covered in eyeshadow.

I think the eyeshadows would be better placed in secure containers and labelled as loose pigments instead. When I worked with this, I have to work the way I would with loose powder eyeshadows. I love working with loose powder eyeshadow, and there's a couple of palettes that have plenty of kickback but I love anyway (Absolute New York's Icon palette, Makeover's Smoky palette) but this is way worse than anything I've ever encountered. After just 1 swatch session, the palette looked grimy and dirty, like a ravaged drugstore tester palette after Black Friday.

The mattes aren't as crumbly, but as you can see from the swatches, you definitely need primer for these. While they're ok blended in softly with a fluffy blending brush when I was applying them, it's slightly harder getting an even layer when you're using a flat brush trying to get a pigmented, opaque layer. The darker colours were especially painful to work with and just swatching them was a frustrating ordeal that made me nearly scream, "SCREW. THIS." while throwing the palette across the room, so many times.

Naked & CamelNaked is white, Camel has a slight yellow tinge.

Magic & Chili (sic)Magic is a warm toned version of Chili, but both look almost identical over primer. Chili performs worse over primer though.

Need Fire & SunriseShould've swatched this side by side in the same row, because any difference you see in the swatches is due to lighting. In real life, I can barely tell them apart.

Party, Copper Rose & SummonThe only difference is the duochrome sheen. Summon & Party are basically Copper Rose with a blue duochrome & bigger red shimmer respectively. You can tell them apart when you pack them on hard with your fingers, but once you're using brushes or blending them out, they're the same shade.


I think they're a waste and one of them should be replaced with a different colour, so it feels like I'm actually getting 18 shades instead of just 12.

Would I buy this again?

Nope. It's a waste of space given how there's more like 12 colours instead of 18, and the mattes are terrible.
Posted by WorkingWithMonolids at 9:24 PM 1 comment: