I got a bunch of Conjure Oils decants from Ajevie again! 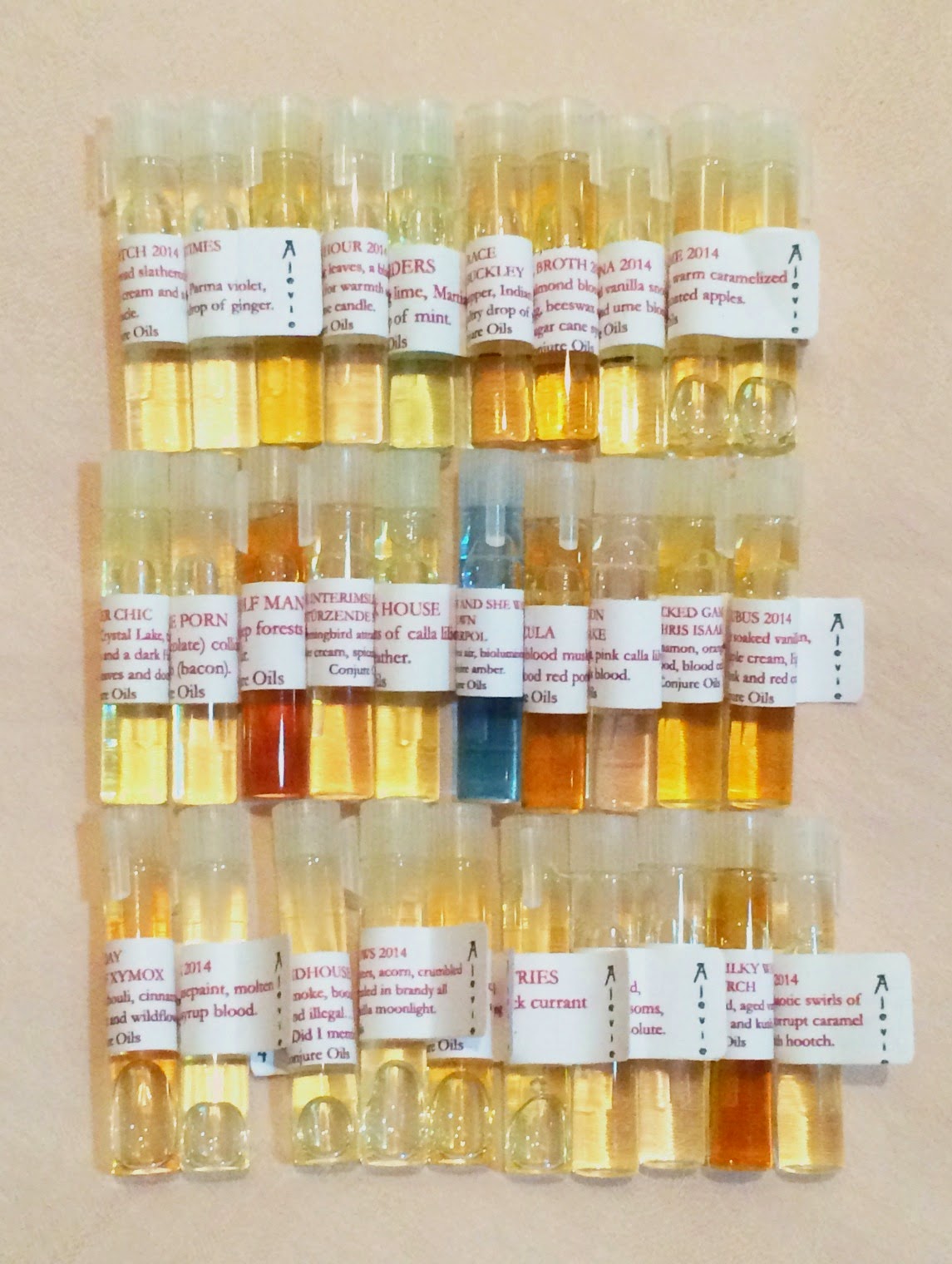 So here's the review for 9 scents from the Dark Cinema: Hallows 2014 collection. As usual, all reviews are done blind until I'm done writing the TL;DR, Overviews are written if anything surprises me.


These perfumes definitely specialise in...weird. I guess it's because it's a Halloween collection. The throw's great and is somewhere between intimate to faux whispering distance for the first 1-1.5h –about half the length of an iPhone 5, to be exact. Then it goes down to intimate whispering distance. It doesn't get faint until about 2h after initial application.

There's that game-y scent that many perfumers like to describe as opium or incense, and NAVA likes to describe as Kashmir. There's also the scent of some slightly artificial red fruit I can't really identify over all the game-y scent. About 45 min after I first applied it, it finally starts smelling like a fruity version of my grandma's altar -full of joss sticks and that prayer paper. If you're not a fan of Chinese incense, you may not like this scent.

The scent is like a watery and papery sort of floral scent. There's just something about this scent that makes you think of delicate paper flowers. Unfortunately, there's something at the base of this scent that I find a bit cloying -it's the artificial grape sort of cloying. It doesn't have the grape scent, but has the cloying part, if that makes any sense. That cloying part reminds me of chewable calcium supplements and that paste some dentists use when they're deep-cleaning your teeth. I guess this part makes it unique, but I kinda wished it stayed boring at the watery, papery florals bit.

Overview: I had to check out the scent of osmanthus & juniper to figure out what's causing that cloying smell. I think it's the juniper. According to How Stuff Works:

"Sleazy booze, cigar smoke, booze, maybe a hint of something green and illegal… and blood. Lots and lots of blood. Did I mention the booze?"

It smells like a wet toilet in a cheap structure, minus the poo & pee. The kind with white tiles, corrugated pipes and a cheap lemon-floral air freshener that sears your nose.

Not for me, but I'm sure it's deliberate and I'm impressed they captured that scent so well. As it dries down, you're left with a floral, fruity citrus scent that smells like the air freshener in slightly nicer toilets, but still a toilet air freshener.

Overview: Ok, I can see the metallic corrugated pipes scent being the scent of blood from someone who follows a high iron diet. I can't really smell any smoke over the other scents. If I try really hard, I can smell the weed scent, I guess. It's really faint and drowned out by the air freshener scent though. I guess the sweet, wet part of the scent is slightly boozy, but it's more of that sickly sweet smell like last night's booze that was spilled on the couch. Let's be honest though, a lot of cheap, public restrooms often smell slightly like weed and last night's booze.

"The waters of Camp Crystal Lake, the steamy hiss of a boiler room and a dark Halloween night of crisp leaves and doom."

Oh, a blue note and some kind of pepper. Ok, so this scent is trying its best to be sweet, but it just ends up with this sweet & sour peppery scent, that just reminds me of eating instant Tom Yum flavoured ramen. After about 15-20 min, there's a sweet musky scent that finally overpowers the Tom Yum ramen scent, but unfortunately, I find it too heavy for me.

The scent it leaves when it dries down is that generic, heavy, sweet, and musky blue scent that could be an old lady's signature perfume.

It's hard to describe this scent - it's that slightly bitter blue scent that makes me think of men's colognes, at the same time, there's a candied, musky amber scent that reminds me of an older woman. There's also that scent of icy oils for muscle relief (eucalyptus, balsam) but without the icy zing.

The result is like an absent minded old man who accidentally spritzed on his wife's perfume, then tried to cover it up with his own cologne. Oh, and he's the type of old man who perpetually smells of icy oils, of course.

The musky amber got amped up on me to the point where it's giving me a headache.

This is awesome. It's a floral with some fizzy fruitiness in it. The florals is one of those elegant, light florals that smells fresh and ladylike at the same time. I got a burst of what smelled like that plasticky leather note in the beginning, but the other parts of the scent overpowered it. It's still hanging around in the background, but it's faint enough that it smells more like good quality plastic chairs rather than cheap plastic stools that get sticky in hot temperatures. It's a clean, sweet scent -has a bit of that office type of sterile smell, but still toned down with elegant florals to add some life to it. Oh and plastic chairs. There's plastic chairs in this scent.

This scent reminds me of one of the tuition centres I used to go to as a kid. While I'm technically Indonesian, my family's still Chinese, so obviously I've been going for extra tutoring since I was in kindergarten. It's definitely the smell of one of the nicer tuition centres -the kind with carpeted floors, adorable kid-sized chairs, teachers who don't yell so much, and actual play time.

This is a daycare in Vegas and I really want to attend it. Screw work. I want to fingerpaint all day.
Image courtesy of creativekidslearningcenter.com

Ok, I got citrus and that cottony, baby powder-ish scent, only the cottony bit is attached to a rather heavy and powdery musk. It's a bit too heavy for me..almost suffocatingly heavy. I was going to scrub it off but got called to a meeting and ended up stuck with this slightly headache-inducing scent for about an hour. After an hour though, the scent dries down and it's amazing. It smells like clean baby oil. I've encountered a lot of baby oil scents before that don't come with the headache-inducing heaviness, though, so I think I'll pass on this one.

Overview: Tried again...the mint probably got drowned out by the heaviness because I can't smell it.

Ok, we've got some citrus here and a scent that smells like the taste of soap in your mouth. There's that game-y scent again. The kind perfumers often refer to as opium or incense & NAVA refers to as "Kashmir". The sweetness is a bit too heavy & cloying for me, but my skin does tent to amp up sweet notes.

After about 20 min, the game-y scent faded enough but it's still there. The scent smells more chemical-ish now, thanks to that soap suds in your mouth scent. The resulting scent is like the scent of shirts in a Southeast Asian market - where you can still smell the ink and goodness knows what else goes into  the manufacturing process.

Overview: Ugh...looks like they also use that game-y incense note. Not getting anything incense from Conjure anymore.

Chocolate & singed hair. The chocolate is one of those very well done rich, velvety chocolate notes. As time goes on, the singed hair scent got a bit wetter and it kinda reminds me of burnt victim in a hospital. I guess I'm thinking more of burnt flesh rather than cooked meat since there's this clinicial hospital disinfectant smell, so it smells like being in an ER full of burn victims. If this is their smoke note going wrong on me, I'm avoiding anything with smoke from them. Forever.

Luckily the burn victim smell is gone by 25 min, and the scent I'm left with is Indonesian "chocolate". In Indonesia, a college graduate often only get $300/month for salary. As you can guess a $1-2 bar of chocolate is like a $10-20 treat for a recent American college grad in the liberal arts fields (ex-Sociology major here..still pretty bitter about the job options). So what a lot of companies, including international companies like Nestlé, would do is that they use a cheaper "chocolate" to make their candies cheaper. The cheaper chocolate tends to be more crumbly and tastes like solidified oil and crumbly, cheap, chocolate powder. Some companies take this to larger extremes and create chocolates that are even cheaper at 5-15¢ for each bar.

These 5-15¢ chocolates usually has this weird waxy film over them, taste mostly of solidified oil with few sad traces of crumbly, sickly sweet "chocolate" powder, and always, always smell of the cheap plastic wrapping it's in. This is what the scent smells like –oily, powdery cheap chocolate and cheap, plastic wrapping. If you've ever tried extremely cheap chocolate coins from Asian supermarkets, you may know the taste I'm talking about.

Overview: Their bacon does smell like singed flesh. It's creepy.
Posted by WorkingWithMonolids at 1:05 AM