I finally got my Aromaleigh order! 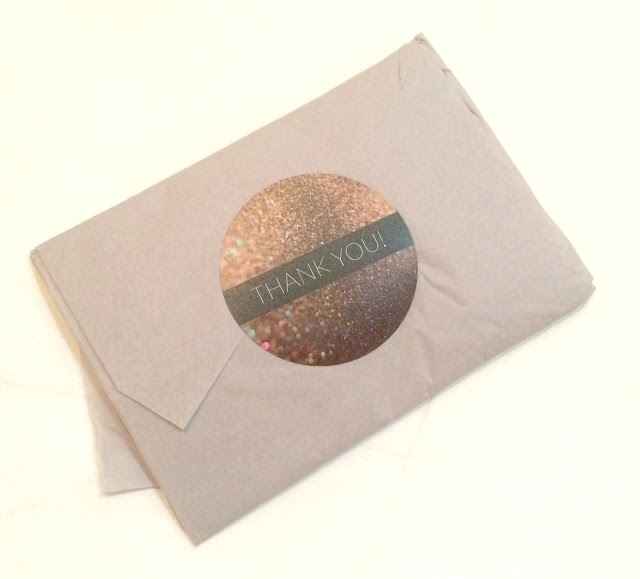 I ordered all 10 colours from the colour-shifting Fatalis collection and finally finished with swatching. I also got 2 free samples, and I'll be swatching them in this post as well, since I don't see the point of creating a whole new post for just 2 swatches. 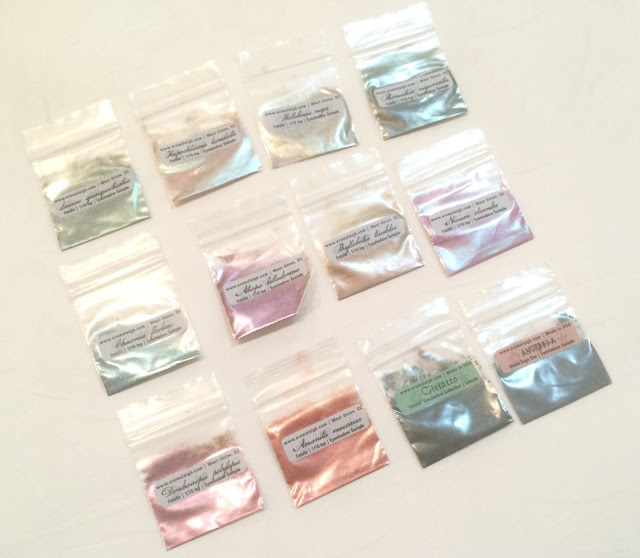 Before I get on to my review, I need to address the controversy around Aromaleigh.

Aromaleigh is a brand that popped up several times in people's blacklists, so I've included that in my IMAM blacklist page. The reason for this is because they previously sold eyeshadows containing [unsafe] [ingredients], and known for terrible customer service.  The owner was also known for harassing any negative reviewers.

They hired someone else to handle their customer relations now and there haven't been any complaints since 2010, even though the owner's still the same person. I was enamoured by the Fatalis promotinal pictures and thought that was long enough to to give them a try again, so I decided to place an order.

After my blacklist went public, several users contacted me to inform me that they experienced intimidation or unprofessional behaviour from the owner too via PM on reddit over bad reviews. A blogger I highly respect also told me her story and gave me permission to share the PM (with her name removed): 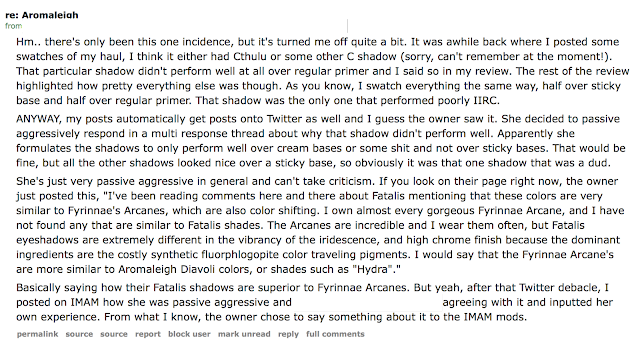 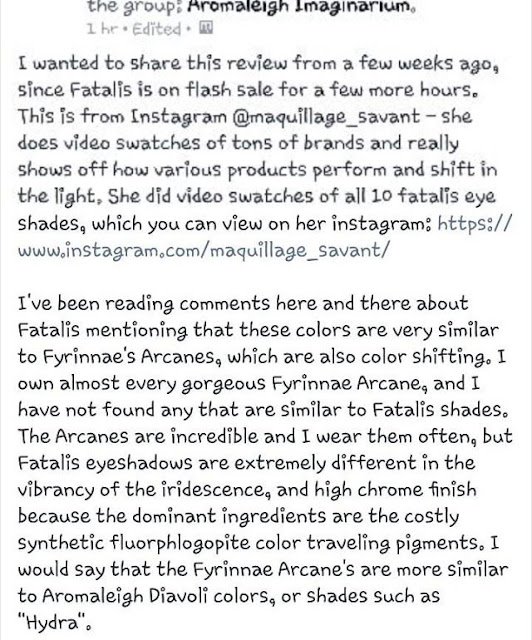 Unfortunately, I already placed my order. I'm personally no longer comfortable with supporting this company, so I will not be making further purchases.

EDIT 13 Nov, 2015: A few hours before I posted this review, Etherealize Me posted a review and swatches of the Fatalis Collection as well. Her review was not negative, but it wasn't glowing either, and for this review, Aromaleigh has kicked her out of the Aromaleigh private group without any notification. The Reddit thread where I posted this review also got brigaded. Looks like what people have been telling me is true, and Aromaleigh is still intimidating & "punishing" anyone who gives them a less than glowing review. I'll be updating my blacklist to state that her actions were not a thing of the past and something that's still happening today.

EDIT 17 Nov, 2015: This edit came so late since I was traveling and had to check with Etherealize Me first. Aromaleigh had announced that they were deleting the private group anyway, and no one was kicked out of retaliation. However, the group was deleted 4 hours after she was kicked out and an hour or so after I reported the incident in my edit. Of course, I've also been blocked from Aromaleigh's instagram page as well.

So for my swatches, I'm doing something different from my usual swatches and review. First of all, I won't be doing macro shots because I find that the shift gets lost in the macro shots, and it just looks like a plain, shimmery shadow. Instead of lining up all the colours in a row so you can check for potential dupes, I decided to break the swatches up to individual colours instead. This is because the shifts are only seen at certain angles, so in every arm swatch I did, I can't get a single shot that shows off every colour's shifts. Plus, I could only swatch 3-4 colours at a time since I need to swatch over the skinnier & more curved part of my arm to get the shift out.

I'm also only swatching over Eccentric Cosmetics' primer and Fyrinnae's Pixie Epoxy too, instead of including bare skin and foiled with water swatches because these eyeshadows are pretty steep at $1.25 for 1/16th of a teaspoon. That's about 1/4 - 1/2 of the typical indie eyeshadow sample. Besides, the Aromaleigh's site also states: "As always, I recommend a regular cream base such as NYX cream eyeshadow base."

Without further ado, here are the swatches arranged according to colour. Left is over Fyrinnae's pixie Epoxy and right is over Eccentric Cosmetics' primer. All swatches are done at various angles under natural light: 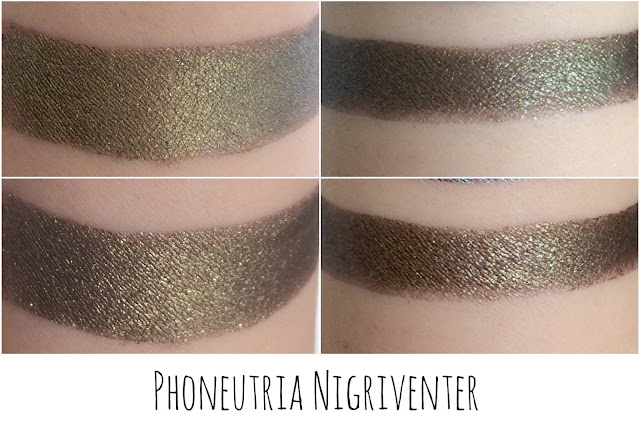 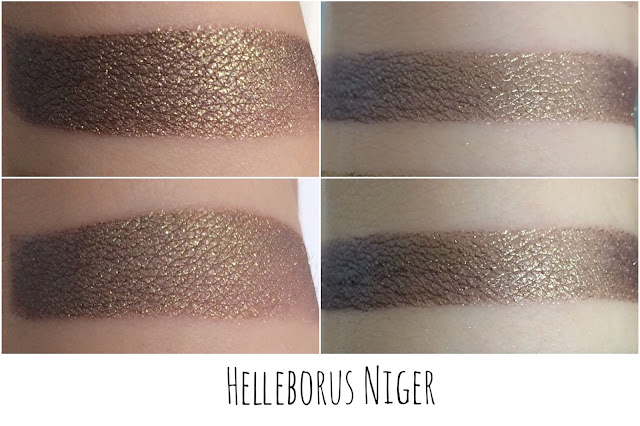 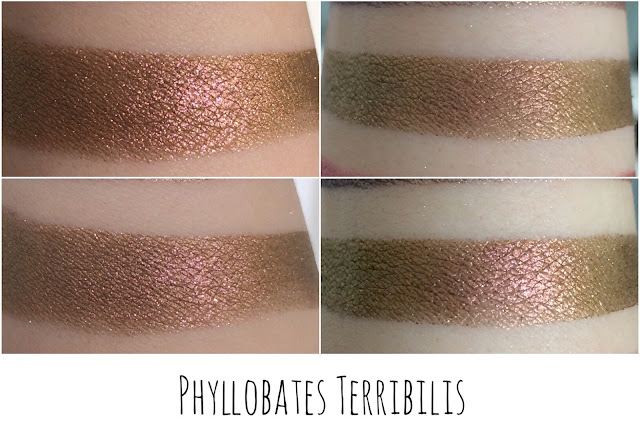 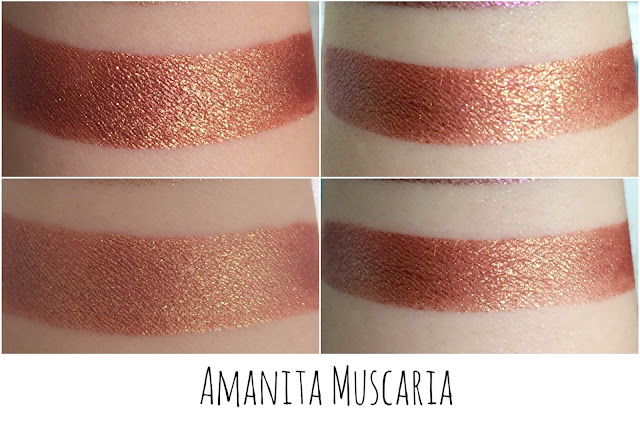 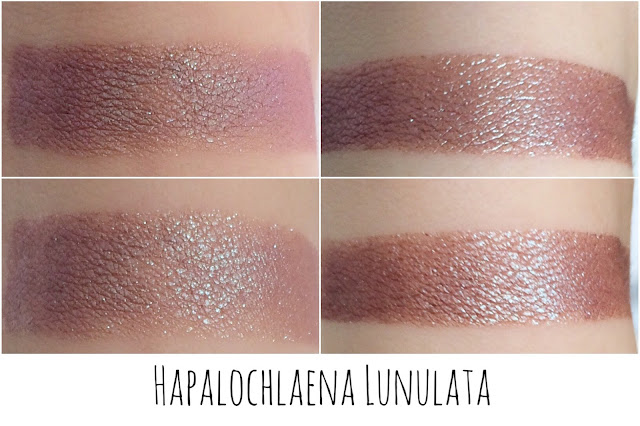 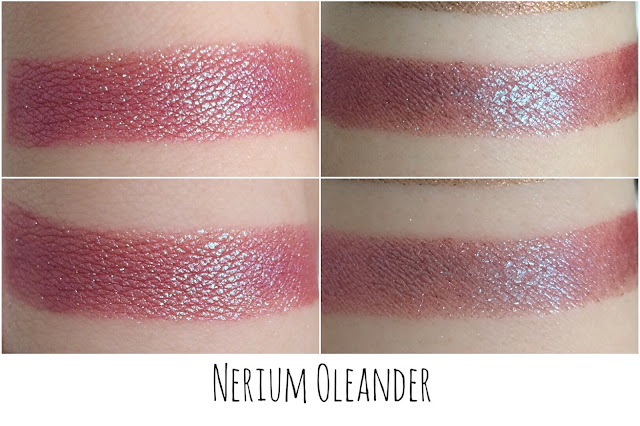 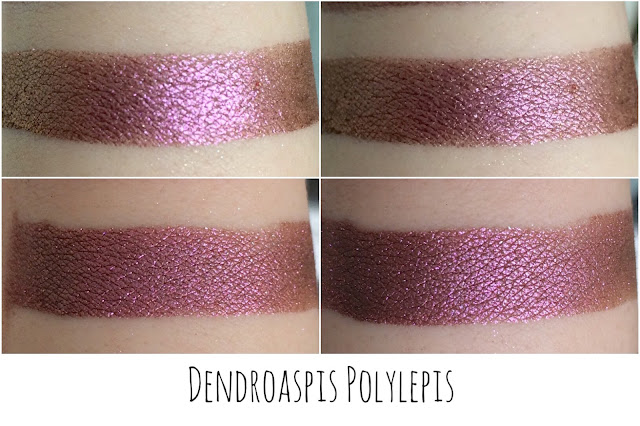 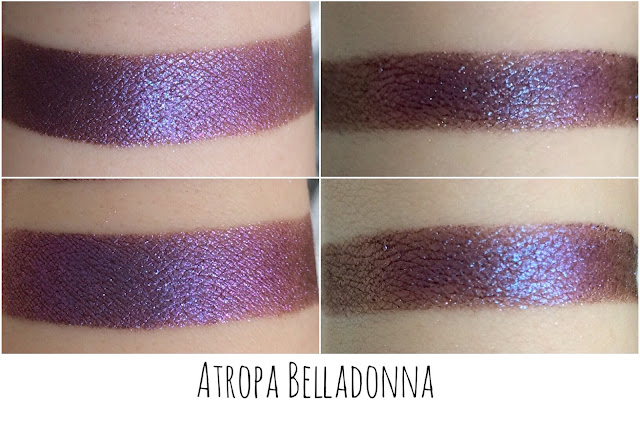 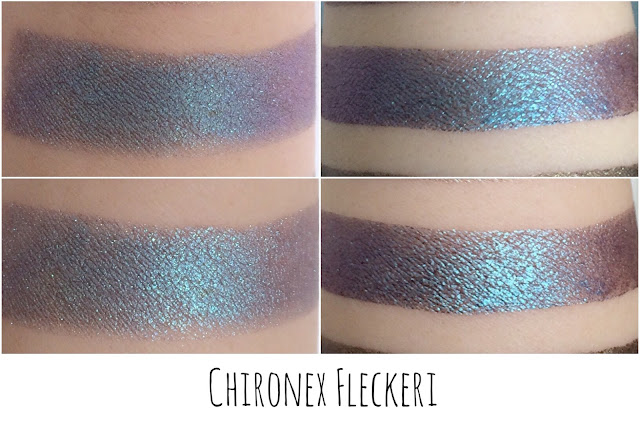 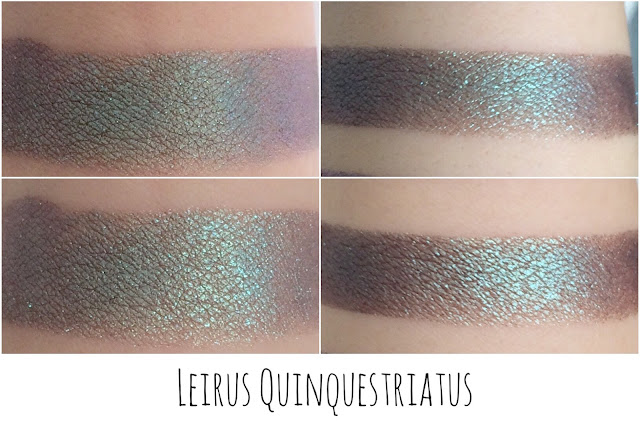 The shift in the Fatalis Collection is definitely strong and I do think they great. Eccentric Cosmetics' primer is amazing so these eyeshadows look great over that primer alone. They're slightly more sheer over primer alone, but you can get around it by using an eyeshadow base or eyeliner underneath (I'll show it in pictures below).

I really should be more excited over these eyeshadows, but I admit I ended up rather disappointed. I pre-ordered this collection thanks to these promotional pictures:

As you can see, they swatch nothing like that. Now, I'm familiar with TKB's Moon Dust or Planetary pigments, and even shared recipes for creating colour-shifting eyeshadows using the Planetary pigments. The promotional pictures look so much more stunning than what I'm used to, so I thought they're using more intense, more expensive, and not so easily available colour-shifting pigments. That's why I didn't mind paying the higher price.

After I got them, I discovered they're pretty much the same as Fyrinnae's Arcanes in terms of performance, only much more expensive, so I guess I was kinda disappointed.

Here's a comparison of prices for other indies with colour-shifting eyeshadows:

Converting everything to 1 teaspoon, this is how every brand's colour shifting shadows cost for 1 teaspoon:


As you can see, Aromaleigh is much, much more expensive than all the other brands. Unfortunately, I don't think it's special enough to justify the price difference. Oh, and here's what the fine print says:

Yeah, I think I rather just go ahead and photograph these eyeshadows in the most realistic conditions instead of setting up a crazy light set up just to get the most intense photos.

Objectively, I think these eyeshadows are pretty and I'm happy with their performance over primer alone. I'm really happy the shift shows up, even over primer alone. However, if their swatches are just more realistic, I think I would've been satisfied with my purchase rather than disappointed and let down.

Chironex Fleckeri over primer only

As you can see, the shift shows over primer only. IRL, it looks a bit sheer, but it's opaque enough for me to skip the glitter glue on most days.

To get this opacity, I first patted on the eyeshadow over Eccentric Cosmetics' primer, then I applied Fyrinnae's Pixie Epoxy over it before patting a second layer of the eyeshadow. 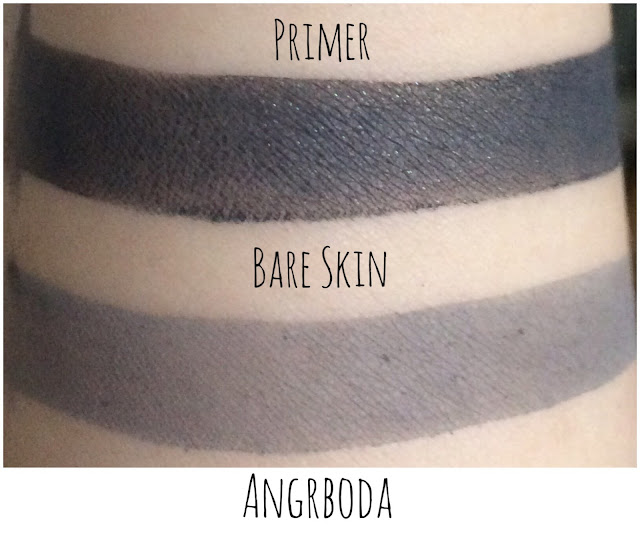 Angrboda is really buttery smooth texture-wise, but as you can see from the swatches, it tends to streak. You can pat it on and slowly build it up, but it doesn't blend out very well and has the tendency to cling on to my pores and emphasize them when I attempt to blend or sheer it out. I say attempt since it doesn't blend out that well. Here's an EOTD to show you what I'm talking about:

It was supposed to be a smokey eye and I was using a stiff brush to blend it out. I definitely recommend using an skin-coloured eyeshadow underneath this to prevent the eyeshadow from clinging to your pores. 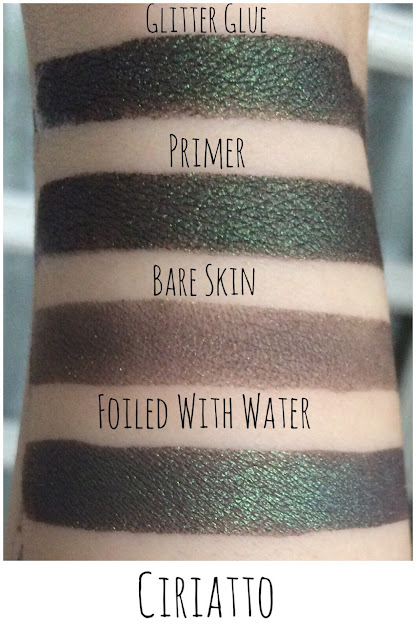 Ciriatto is pretty, but I'm really having a hard time getting the same colour I get on swatches on my eyes. When applying it on my eyes, all the duochrome seems to get rubbed off and I end up getting a plain black eyeshadow as you can see from the previous EOTD. In the EOTD below, Ciriatto is on the outer 1/3 of my eye, but you can see it just looks black: 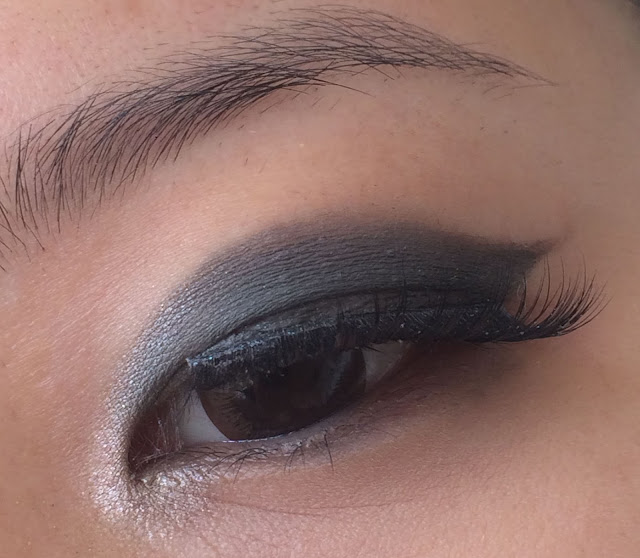 This is over Eccentric Cosmetics' primer too, which can usually bring every shift out. Here's a picture of the work in progress, so you can see how Ciriatto looks like, even when I haven't blended it on: 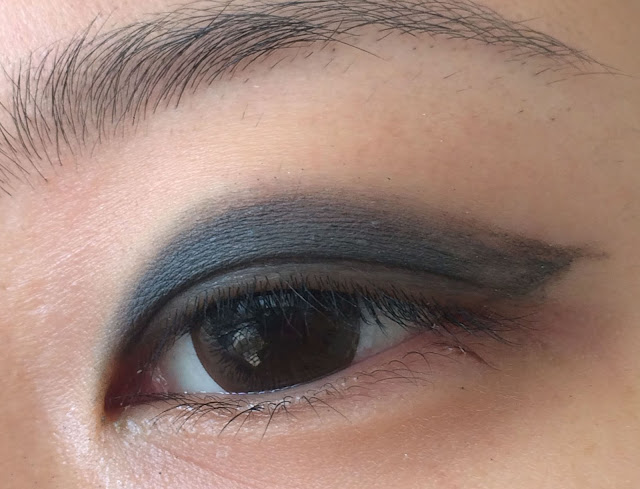 Posted by WorkingWithMonolids at 8:40 PM